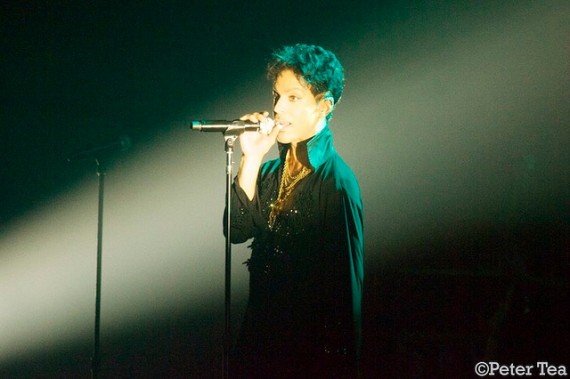 A public figure, Price is paradoxically intensely secretive about his private life, not even letting a team photograph the contents of his fridge.
(Photo : Photo by Peter Tea/Flickr CC)

The late singer, Prince, achieved something most celebrities are struggling to maintain - the privacy of his personal life. While the music legend is famous worldwide and boasts of a prolific career spanning decades, little has been known about his personal life, such as what Prince's favorite foods are.

Luckily, Prince actually allowed someone at one point to see what the rockstar has in his refrigerator. The team from Heavy Table, wanted to feature Prince on their What's In Your Fridge series but they were nor really placing too much hope that the rockstar would agree knowing that he valued his privacy.

Surprisingly, Prince agreed but imposed certain conditions. True to his privacy concerns, the star would only agree if the team would not give any hint about his home, whether through its description or even its location.

The second condition was that Prince would not be actually present when the team inspects his fridge. Lastly, he insisted that the team must not bring any photographer. This became an issue for the inspecting team because taking pictures is usually how they document their findings. Luckily, a compromise was reached where the team was allowed to bring along an illustrator to make a sketch of whatever they found on the singer's ref.

And here are some of the items that the team discovered in the artist's fridge, a collection of seemingly unconnected food items that truly speaks for his versatile and obviously uncommon taste, leaving us a glimpse of what Prince actually liked to eat.

1.Even though a healthy eater, Prince actually loved junk food but only one kind - Dunk-a-roos.

Those who are old enough will remember these; chocolate or vanilla coated cookies that are shaped like kangaroos which are quite common during the nineties. Prince admitted later in an email that Dunk-a-roos are his comfort food bringing him back to his childhood.

2.Prince must have loved mustard a lot.

The team was surprised to find 18 jars of mustard inside the artist's fridge, even one from Germany. And every jar was opened and obviously used at some point. Ask for a comment, Prince admitted he loves mustard especially the raspberry kind. And no, he was not into collecting mustard either, all eighteen of them just happened to end up in his fridge.

Why is this item worthy of mention. Well probably because an entire gallon was found inside his ref. Prince was a waffle lover and, according to him, only maple syrup ever touches his waffle. But the maple syrup he has is actually the real thing.

These paired items were not actually found in the fridge during the team's investigation but Prince was well-known for his love of pasta. Albert Magnoli, director of the film Purple Rain which also starred Prince, mentioned that the combination was his favorite, reports Delish.

A known vegan, the presence of green would not be surprising. He confirms that he loves dipping them in fig balsamic or dressing them in olive oil.