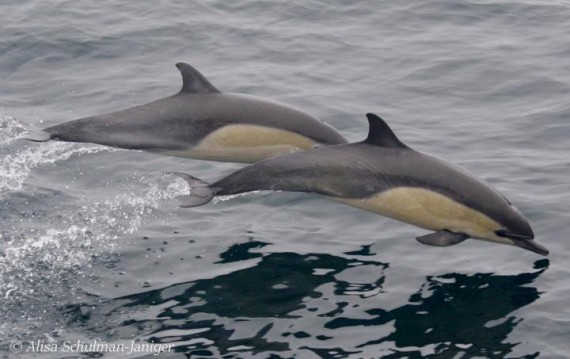 While the impacts of environmental changes on specific marine organisms have been well examined, less is understood about impacts on food web dynamics -- due to a lack of methods that measure food web length over time. To further investigate such changes in food web structure, Rocio Ruiz-Cooley and colleagues studied the short-beaked common dolphin, Delphinus delphis, as an ecosystem indicator because dolphins are known to integrate chemical characteristics of their habitat through their diets. Ruiz-Cooley et al. traced nitrogen isotopes to track how amino acids in food sources at the base of the food chain eventually reached the dolphins. These proxies of food chain length exhibited strong declines after the 1997 to 1999 El Niño Southern Oscillation event, and after 2004, coinciding with a reduction in dissolved oxygen in the water.

The authors propose that three main factors could contribute to the isotope changes: shifts in diet between optimal and suboptimal prey, significant changes in community assemblages of the deep scattering layer (where a range of marine animals are found) and shifts in nitrogen cycling that affect plankton. Trends of declining dissolved oxygen concentration and stronger El Niño events have become more evident in recent years and are predicted to continue. As such, the authors say their approach could be used for future monitoring efforts to understand variability in food chain length in response to climate change.