A woman from America showed off McDonald's hamburger and fries, which she kept for 24 years to reveal the treasured food's appearance. The burger and fries still look as good as new after more than two decades of being kept in a closet. 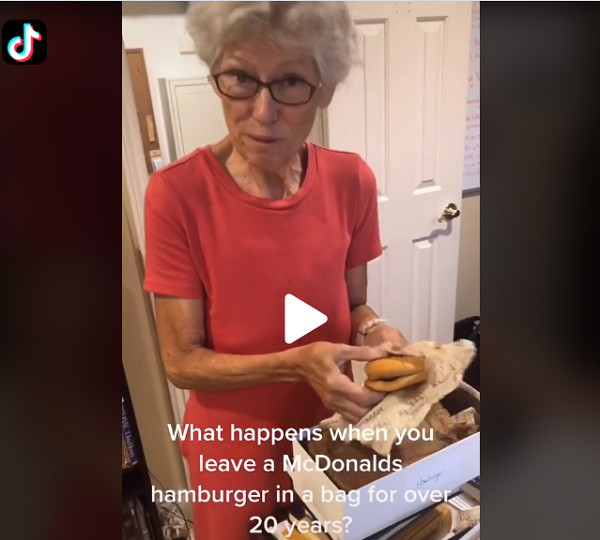 (Photo : tiktok screenshot)
Woman Reveals What McDonald's Hamburger and Fries Looks Like After Keeping It for 24 Years

A video uploaded by a TikTok user @aly.sherb went viral as she shared a clip of her grandmother showing off the meal from McDonald's that the older woman wrapped up in a shoebox for more than two decades.

In the video, Aly's grandmother confidently showed the science experiment. The woman pointed on the 1996 Nascar packaging, the lack of mold, and the burger that is still wholly intact up to this day.

According to Daily Mail, the grandmother didn't explain what forced her to put the food away before her grandchild was born, but she said, "it lives in a box in my closet."

Probably, it helped that the burger was plain with no ketchup, mustard or pickles often found on a McDonald's burger. The meals from the famous food chain are notorious for not showing signs of decay. Several customers also went viral over the years for keeping McDonald's meals for many years.

Recently, David Whipple from Utah showed off his 20-year-old burger that he described to look like newly purchased.

Whipple told KUTV that he brought the burger on July 7, 1999, and he had not set out to save the food. At first, Whipple stuck the burger in a pocket and forgot about the meal. As the coat hung in his closet, the burger was kept there for two years.

When David saw that the burger still looked the same after several years, he kept the experiment longer. The man recently pointed out that the decay can be seen on the inside of the bun if it is lifted.

Way back in 2016, a Reddit user posted a photo of a McDonald's burger and fries kept for ten years but still looks like newly bought meals.

At McDonald's news website, the company responded to the allegations or "myths" that its burgers don't decay. The statement reads, "In the right environment, our burgers, like most other foods, could decompose."

The fast-food chain added that there are certain conditions to decompose, specifically moisture. Without enough moisture in the environment or food, mold and bacteria may not grow. Thus, the burger will not decompose. Also, if the food becomes dry enough, it is unlikely to grow mold or bacteria.

Meanwhile, Burger King announced in February that it removed artificial preservatives from its Whopper sandwich in more than 400 restaurants.

A campaign was launched showing that Burger King's Whopper does get moldy over time, along with the burger's images looking unappetizing, with green and white mold spreading over the bun, meat, and lettuce, to spread the news.

In a press release, Fernando Machado, Restaurant Brands International's global chief marketing officer, said: "At Burger King restaurants, we believe that real food tastes better. That's why we are working hard to remove preservatives, colors, and flavors from artificial sources from the food we serve in all countries worldwide."