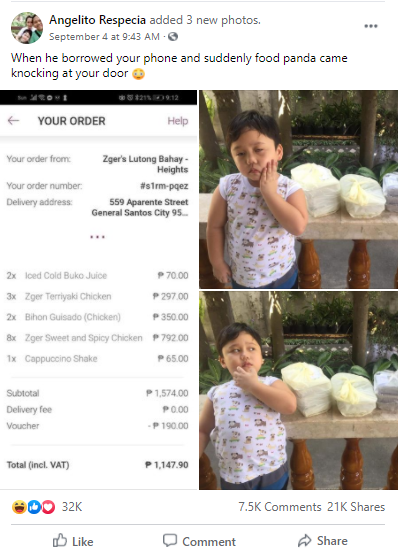 A 5-year-old child from the Philippines went viral as parents posted his pictures alongside his story of how he ordered in Food Panda and left his parents shocked with the bill.
(Photo : Facebook Screenshot)

A 5-year-old child from the Philippines went viral as parents posted his pictures alongside his story of how he ordered in FoodPanda and left his parents shocked with the bill.

In an exclusive interview with Dailypedia, the child's father told how shocked they were on Friday when a Food Panda rider came to their house at around 9 A.M. and delivered the food ordered by his son Genesis Gabriel. The Facebook user Angelito Respecia is the father of Genesis, who posted photos of his son with the food and delivery bill amounted to a total of ₱1,147.90 ($23.6).

When he borrowed your phone and suddenly food panda came knocking at your door Posted by Angelito Respecia on Thursday, September 3, 2020

Respecia was shocked because it was still early and they were done eating. He thought that his wife ordered for their son, Gabriel.

What shocked Angelito more was the bill of the delivery as it reached more than a thousand pesos. Angelito said that they tried to cancel the order, but the rider said that they could no longer do it, so he was left with no option but to pay the amount and accept the order.

Angelito called his wife to check the phone because he was so shocked to see the rider's total amount said it's more than a thousand pesos. As Angelito failed to cancel the order, he was scratching his head, paying the bill.

According to MSN, Gab started using gadgets when he was six months old only. The father said in the interview that Gab usually accesses Google maps, YouTube, and the Bible app, as he grew older. The parents claim that they limit exposing Gab to gadgets.

The father said that during the time Gab ordered in FoodPanda, his mom was talking with someone and forgot to remind the child. Though the parents were in total shock, they can't help but laugh over the incident, as per Respacio.

Respecia explained that they could not blame Gab for what happened, but they told him not to access the food delivery app. Angelito also mentioned that they don't intend to make their post viral. The parents reiterated that they only want to share their experience with social media people. The post was shared to serve parents' lesson to guide their children with the mobile apps that their children are accessing.

Angelito said he was overwhelmed with what happened, that's why he posted the incident to warn other parents and to avoid happening it to them.

Respecia added that his sister took the pictures at first to send it to their siblings and tell what Gab did. However, Respecia borrowed the photos and posted it as well without any intentions to make it viral. The post garnered 32K reactions, 7.5 comments, and 21K shares on Facebook.

Food Delivery Customers: More than 20% of Them Encounter Problem