County Fresh voluntarily recalled a variety of fresh-cut fruits from Walmart stores suspected of listeria contamination. The company issued a voluntary recall of its Freshness Guaranteed sliced or cut grapes, apples, pineapples, cantaloupe, and mangos. According to Fox Business, the contaminated fruits were distributed to Walmart stores in nine states.

Indiana, Kansas, Illinois, Louisiana, Arkansas, Missouri, Kentucky, Oklahoma, and Texas are the states where Walmart stores receive affected fruits, as per the notice from the U.S. Food and Drug Administration (FDA). On October 1, the company initiated a voluntary recall of a limited quantity of watermelon chunks from Walmart stores for the same reason. Then, the recall for the pre-cut pineapple, apple, grapes, cantaloupe, and mangos came. 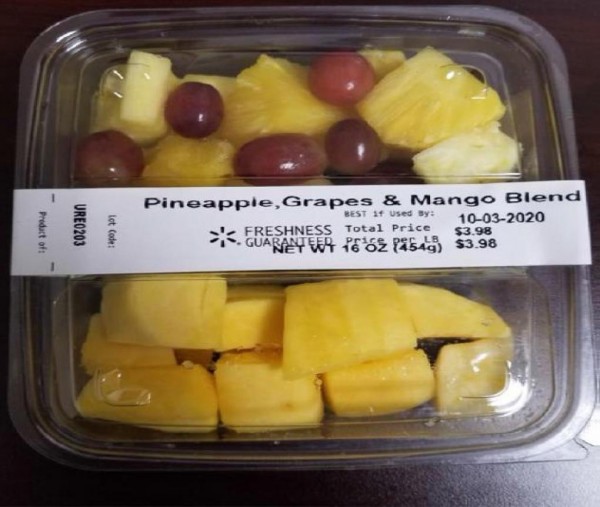 (Photo : US FDA)
Listeria Contamination: FDA Recalls Variety of Fresh-Cut Fruits From Walmart Stores Country Fresh is extending their voluntary recall issued on October 2, 2020 to include various containers of “Freshness Guaranteed “cut and/or sliced apples, grapes, mangos, pineapples and cantaloupe distributed by Walmart. The recall is a precautionary measure due to a possible health risk from Listeria monocytogenes detected on equipment used in an area near where these products are packed. FDA discovered these findings during a recent inspection.

The FDA, however, said that the recall is just a precautionary measure. After a recent FDA inspection revealed that they detected listeria monocytogenes in equipment used in a particular area near where the fruits are packed, the recall was initiated.

Listeria has the ability to cause severe and worse, fatal infections in older people, children, or anyone with weak immune systems if consumed, the FDA said. The agency also added that healthy people could also experience short-term symptoms. These symptoms may include stiffness, severe headache, fever, abdominal pain, diarrhea, and nausea.

Listeriosis is an infection that causes stillbirths and miscarriage in pregnant women, as per the FDA. The fresh-cut fruits have different product codes, and their "best used by" dates are from October 3 to October 11. Walmart stores quickly removed the products from store shelves and inventories, the FDA says. Meanwhile, consumers of the affected pre-cut products must discard it immediately.

The FDA statement noted that the recall of the County Fresh fruits was a precautionary measure because it might have possible health risks after inspecting the packaging area. Initially, the fruits are shipped to the Walmart distribution center prior to sending it to different Walmart stores.

According to IB Times, Walmart made immediate efforts to remove the products from their stores. Listeriosis could be treated through bacterial culture. The process is done by carrying out the bacteria in the laboratory. The samples are used for testing and could be taken from the body tissue, fluid, blood, or spinal fluid. Health experts often prescribe antibiotics for the treatment of listeria infection.

In August, FWN reported the same case wherein products are recalled. The FDA recalls Freshouse products such as limes, lemons, oranges, and red potatoes due to potential listeria contamination.

The organism was found on the equipment of the company's packing facilities. In a statement that the company issued, Freshouse President Jamey Friedman said they voluntarily recall their products for the abundance of caution to decrease public health's slightest risk.