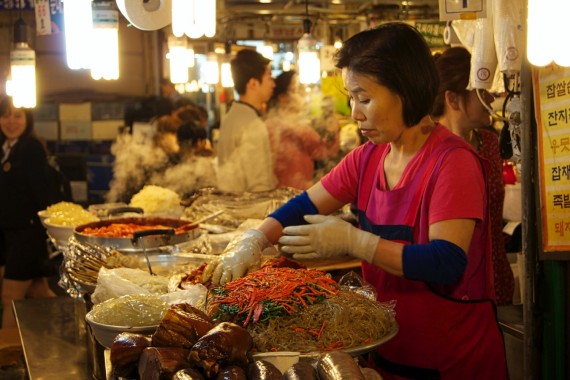 The enormous egg roll made by a Korean street vendor consists of 60 eggs made a huge buzz on the internet.

Street food is pretty much a part of our daily lives. However, every now and then, we would come across a creation that would make a huge impression. In this case, it doesn't only make a huge impression, but it can also satisfy a huge appetite! This is precisely why the 16-minute food prep video went viral and left internet fans in shock.

According to Food NDTV, the viral video is about a street food stall in a market in Korea, showing how they prepare one of their dishes.

Many people have thought it was a simple egg roll or 'gyeran mari' as Koreans call it, but viewers were surprised when they saw the finished product. The Youtube Channel Yummyboy fittingly captioned the video as "Street food in depth and not boring!" As many fans will agree, this is nothing short of boring.

The video started with the street food stall staff preparing the ingredients for the dish, which includes a whopping 60 pieces of eggs.

Whisking all of those 60 eggs in a large bowl, she then seasoned it generously with salt. She then continued to add finely chopped spring onions or scallions, onions, finely diced ham, and crab meat. Using an extra large egg roll pan, she then proceeds to cook the dish.

Although she makes it look effortless, in actuality, the process of creating an egg roll, especially of this size, may be a challenge to many.

Towards the end of the video, she slices the gigantic egg roll carefully, revealing the beautiful layers of the different ingredients that were in it.

Each of these delicious slices were placed neatly in a clear plastic container to be placed on a display case of the food stall. As a result, it is no surprise that this particular video already gained over 18 million views.

A slice of this giant egg roll cost KRW 2,000, which is equivalent to $1.7, making it a pretty awesome and affordable treat. For those who would like to see and taste this dish, you can visit the Pyeongtaek Tongbok Market in Gyeonggi-do, South Korea.

The Youtube channel Yummyboy is not new to creating and uploading videos that showcases a fantastic dish. In fact, the channel hugely focuses on creating content about a wide range of Korean dishes.

With the use of social media and the internet's power, it is not impossible to help promote and make simple dishes like these known. In addition to that, it is also a great way to entice the audience to explore more dishes beyond what they regularly consume. After all, it is always better to live each with a full stomach!

Read also: Top 10 Most Popular American Foods of All Time