Is McDonald's Cheating on You With Your Upsized Drink? TikTok Video Sparks Outrage Online 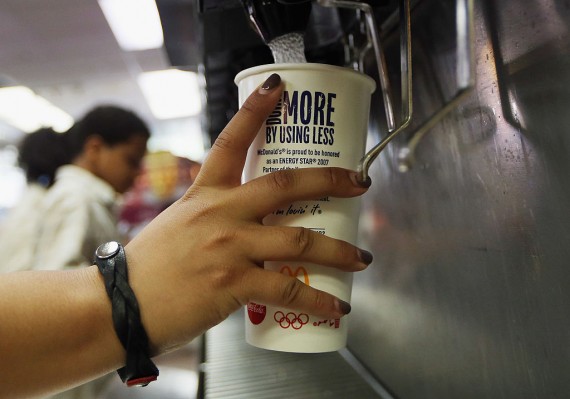 A 24-second TikTok video has gone viral, showing the contents of McDonald's cup sizes are actually all the same.

A TikTok video has gone viral and is currently sparking outrage amongst McDonald's fans. According to Adelaide Now, the video already garnered over 11 million views. However, what made fans curious and some outraged was when the video seemed to indicate that fast-food chain's cups contain the same amount of drink.

Reports from the DailyMail reveals that the video was created and uploaded by Mikah Neufield, 17, carrying the TikTok username @mykah.mykah. He is a Canadian employee in one of the McDonald's stores.

In the video, he was seen pouring Coke into a 16 oz McDonald's cup before tipping the entire contents into a 21 oz size cup and then finally transferring the drink into a 30oz cup.

Each time he pours the contents, it appears to fill the cup up to the brim giving the impression that the containers hold equal amounts despite their size variation.

The viral post already earned over 12,000 comments, with most of them expressing doubt over what was shown. Many believed that the video was cleverly filmed at a certain angle and creatively edited before it was uploaded. Commenters are claiming that some amount of the contents had already been poured into the cups before the stunt was even filmed.

On the other hand, several comments, including one from a former fast-food worker, claim that there is truth to the viral video. The commenter who says he is a former McDonald's staff also gave other customers useful advice. He urges them to always order drinks without ice or with ice on the side or in another cup. Additionally, ordering small size drinks instead of a medium is better.

Meanwhile, another TikTok user tried to debunk the conspiracy by creating her own version doing precisely the same process. Emma Turner, with TikTok handle @weasleytwins_et, showed that there was a definite difference between each drink served. This video garnered over 9 million views.

Rumors That Won't Go Away

For several years, there had been rumors circulating about fast food chains like McDonald's faking their drink sizes. The same video, but this time from US burger chain Jack In The Box, showed that their small, medium, and large sizes held virtually the same soft drink amount. This video went viral last 2017 after it was posted on Twitter.

Similarly, McDonald's has experienced several other rumors thrown their way aside from the amount of soft drinks they serve. There have been claims of their Fillet-O-Fish actually not being fish but meat. There was also an issue over their burger buns containing anti-emetics to prevent customers from vomiting even if they consume more than they should.

However, all of these claims have been found out to be groundless rumors spreading around. McDonald's still holds the title of being the world's largest fast-food restaurant chain and one of the best-known brand names. It is said to feed an estimated 68 billion people a day, which is about 1% of the world's population.