Looking for Cooking Tips? Watch Out for These 5 Kitchen Hacks That Are Actually Dangerous 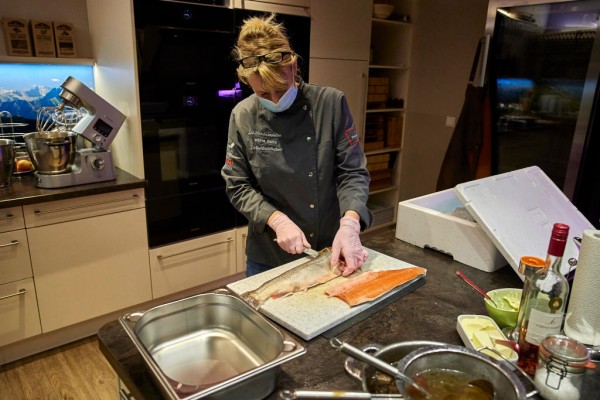 (Photo : Morris MacMatzen)
Chef Bettina Seitz prepares fish for the four-course dinner in her kitchen of the Kochschule Neumuenster cooking school during the second wave of the coronavirus pandemic on November 28, 2020 in Neumuenster, Germany. The school, which is otherwise closed due to current lockdown measures, has begun offering the "candle-light RV dinners" three times a week for up to 15 RVs in an evening as a means to stay in business during the pandemic. Restaurants in Germany have been closed since the beginning of November and will likely remain so into January.

Watching celebrity chefs on the television may sometimes give you kitchen hacks for efficient cooking and faster cooking, and although some of them are dangerous, you might have tried doing them once in a while.

We always hear what hacks along with words that relate to household activities such as cooking and cleaning. According to Merriam Webster, a hack is an improvised solution to a limitation. This word originally is used in computer hardware, but when you put an activity like cooking into account, it somehow embodies the same meaning.

Since the world requires adequate and more time for people, saving it is a very good idea to do more things lined up in your daily chores, and kitchen or cooking hacks just make cooking seem simple and easy.

With the abundance of celebrity chefs and cooking shows in the media, they usually give kitchen hacks, however, some of them are not suitable for beginners and novice home cooks. Here are some of the kitchen or cooking hacks compiled by Today, that is dangerous when not done by an expert.

This chunky guacamole hack was aired on television. In an episode of Barefoot Contessa, Garten recommends chopping the avocadoes in the bowl instead of turning it into a puree for an even tastier version of the dip. However, Garten admits that doing the method will sacrifice a bowl in the process.

Read also: 10 Brilliant Kitchen Hacks You Must Try at Home

Chef-instructor from the Institute of Culinary Education, Frank Proto shares in an interview with Today that the method is dangerous because a knife blade can easily slip sideways endangering the fingers.

Stabbing the garlic to peel it

Garlic peeling can be a challenge. That is why some of the beginners in the kitchen hope that there is a technique that can save their time and energy by just removing its peels.

A Twitter post in June 2019 demonstrates a novel technique of peeling the garlic more quickly. The video demonstrates holding the whole garlic bulb bare and poking the cloves with a knife.

A staff writer from The New Yorker shares her experience while doing the process and she mentions in her update of the article that her knife slipped and she was able to gain 5 stitches on her middle finger of her left hand. Meaning, this method is dangerous.

Cooking in a Dishwasher

Another method of cooking Today mentions is cooking using a dishwasher. This sounds crazy but tries to search on the internet and there are even recipes that you can do.

Berkeley Wellness warns the people that the steam and heat dishwasher emit varies. This only means that not all machines are the same. Berkeley Wellness emphasizes that because of this discrepancy, foods may not always reach the ideal temperature to kill all the harmful bacteria, which can make you sick in the long run.

Can opener in on top of a can

Today mentions this viral video hack that suggests the traditional method of utilizing the can opener to be wrong.

In the video, the can opener was placed on top of the can instead of the side then it removes the whole lid without even dropping on the content of the can.

America's Taste Kitchen's executive tasting and testing editor, Lisa McManus shares in an interview with Today that the task can be frightening when not done properly. She adds that the hands can be injured when raggedy edges are made by a dull can opener.

Using Colander as a lid

Reader's Digest mentions this hack reminding that finding the exact size of the pot and colander should be done to have a grip and avoid spilling the boiling water into the hands. Boiling water is not good news when it comes into contact with your body. Although effective, try to be careful to be safe.

Kitchen hacks should make your cooking experience easy but not dangerous and make you stay away from the kitchen. Although some of the hacks may make sense, putting your safety into priority should always be done.