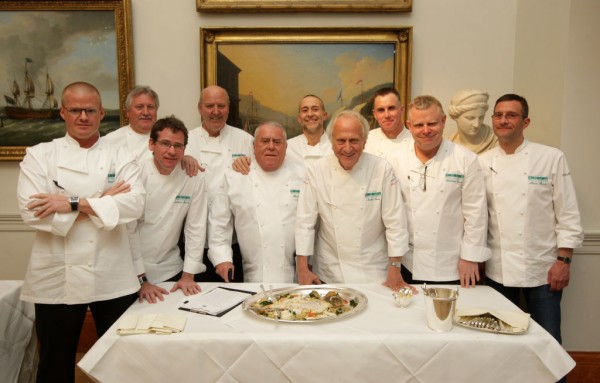 (Photo : Oli Scarff)
Celebrity chefs (L-R) Heston Blumenthal, Brian Turner, Andrew Fairlie, David Nicholls, Albert Roux, Michel Roux Jr, Michel Roux, Garry Rhodes, Richard Vines and Alain Roux pose for a photograph during the judging process in the final round of a competition to win a 'Roux Scholarship' at the Mandarin Oriental Hyde Park on April 6, 2009 in London, England. The prize for being awarded a Roux Scholar is, among other things, £5,000 plus three month's training at a 3-star Michelin establishment.

The famous founder of the legendary Le Gavroche 1967, French Chef Albert Roux dies at age 85 following the parting of his brother Michel Roux who was his co-founder of their British Michelin restaurant. The sorrowful announcement of the Roux family alerts the industry and saddens the whole community including Gordon Ramsay.

According to the Independent, Roux's family said in a statement that the French chef has been unwell for a while and asked for privacy.

Albert Roux's son, Michel Roux Jr. shares with the Independent that his father was a mentor for so many people in the hospitality industry and was a real inspiration among chefs who will is about to start their careers.

Boutique Hotelier notes that both Michel and Albert Roux changed the game for the British restaurant industry when both of them opened the first Michelin starred restaurant in Britain, bringing Parisian-style fine Dining in the United Kingdom.

Alongside their success, the Independent furthers that the Roux Brothers also spearheaded the Roux Scholarship in 1984 which according to Boutique Hotelier helped British chefs to train in restaurants around the world.

Albert Roux's passing pokes the hearts of chefs with big names in the food industry who sincerely pays their tribute to him in honor of his achievements that lifted the British food industry.

Read also: Fans Mock Gordon Ramsay After Seeing This in His Fridge

Gordon Ramsay and the Industry's tribute

In a series of Instagram posts, Gordon Ramsay expresses his distress to the unexpected passing which according to him was his mentor when he was building his career. He also credits in the caption, Albert Roux to be the one who installed Gastronomy in Britain.

He describes Roux as a mentor in another post to be a hard, fair, passionate, and understanding of what young chefs could achieve if they listen. The Heel's Kitchen Celebrity also notes that he and Roux shared the same office for a decade and walking that pathway will now be challenging and difficult for him.

The Insider also mentions that The Michelin Guide also offers their special tribute to Roux through a tweet giving him the title as the father of the UK restaurant Industry.

The Guardian notes that more than half of Britain's Michelin-starred restaurants are operated by people who were personally trained by Albert Roux.

James Martin, a chef, and a television presenter also pay his tribute to Roux calling him a true titan of the food scene, who trained some of the biggest names today in the business.

Apart from Le Gavroche, MSN highlights that Roux and his brother opened The Waterside Inn situated in Berkshire, England. They add that this restaurant received 3 Michelin stars in 1985. The Insider also notes that the Roux brothers also helped in bringing cooking to television with their series, "At home with the Roux Brothers" which debuted in the 1980s.

With hospitality and celebrity chefs like Gordon Ramsay paying tribute to his passing, Albert Roux can be considered one of the foundations of the food industry we enjoy today. Thanks to him, we have chefs who were able to master their craft and perform with their best in the kitchen.

Trader Joe's to Give Incentives to Employees for COVID-19 Vaccine, Hy Vee Launch ...