TAG:Lab-grown meat, Why is lab-grown meat not in the market?, meat, food industry, meat industry 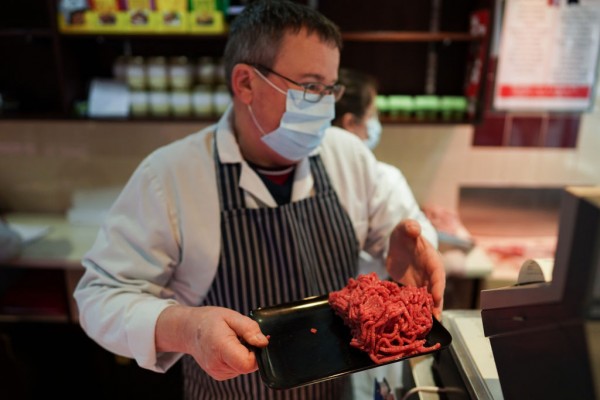 (Photo : Ian Forsyth)
Sausage, mince and eggs are prepared to go into food parcels at Angus Morton Butchers on October 26, 2020 in Richmond, United Kingdom. The butchers are offering free meat and eggs to families in need over the school holidays. In a House of Commons vote last week Conservative MPs voted down a bill that would have provided food for children already on the Free School Meals scheme in schools. Hundreds of businesses across the country have offered children in need meals after pleas from the England and Manchester United Footballer Marcus Rashford.

Meat is one of the most consumed food, not only in America but also around the globe. With varieties from pork, beef, and even lamb meat, conventional meats are often used from simple to gourmet dishes served on the table.

With the rise and advancement of technology, lab-grown meats are invented by scientists which can be enjoyed just like traditional meat.

Also called clean meat and cultured meat, this product of science is flesh grown outside of an animal's body, according to Sentient Media. This means that this product is meat that is farmed without the slaughter of innocent animals.

They add that this particular meat is composed of animal cells starting from a biopsy then cultured and grown into masses of cells.

Lab-grown meats are still animal products that may not meet the requirement as a meal, especially if you are on a plant-based flexitarian diet.

Why is lab-grown meat not in the market?

According to EU-Startups, lab-grown meats are more sustainable than the traditional farming of meat from animals. They point out that cultured meats have the potential to reduce greenhouse gas emissions by 78-96%; what a way to contribute to the lessening of global warming.

Even with this benefit, lab-grown meat still cannot dominate the meat industry. To give you an idea of why there are three main reasons why this type of meat cannot get on the good side of the consumers.

Read also: From Lab-grown Meat And Chicken-less Nuggets: Food Innovations That Will Surprise You

Lab-grown meat is technically considered food, and the taste is a big issue. A report by Medium company Memphis Meats claims that their meat's taste is indistinguishable from conventional meat.

However, when it comes to food, people put the taste as the utmost priority. Eu-Startups note that even though scientists took a lot of time and effort to make sure that the lab meats still taste like the real meat, consumers are still not convinced.

This might be the most challenging part the lab meat producers will have to face. To enter the official roster of grocery meats, they should be able to convince their consumers to try their meat product. EU-Startups mentions a study that demonstrates the consumers are not yet ready to accept the product.

Stryber notes that in Germany alone, a representative survey shows that cultured meat is still unknown in the country. This might be possible for other countries as well. That is why consumer acceptance will be a challenge.

EU-Startups points out that cultured meat is not cheap to produce. They mention a first dish grown burger that costs over 300,000 US Dollar and takes about two years to make.

Medium adds that in 2016, Memphis Meats states that they reduced the cost of production from $18,000 to $9,000. This is still expensive, but the diminished cost is evident enough.

Meanwhile, EU-Startups also note that there is a prediction of individual lab burgers costing 10 dollars this year, a price that is still not quite competitive in a standard burger.

Lab-grown meat still has a long way to enter the meat industry because they would have to tackle these three walls before securing its seat. All we have to do is wait if it can land on our grocery freezers sooner or later.

WATCH: This Breakthrough in Lab-Grown Meat Could Make it Look Like Real Flesh from Seeker