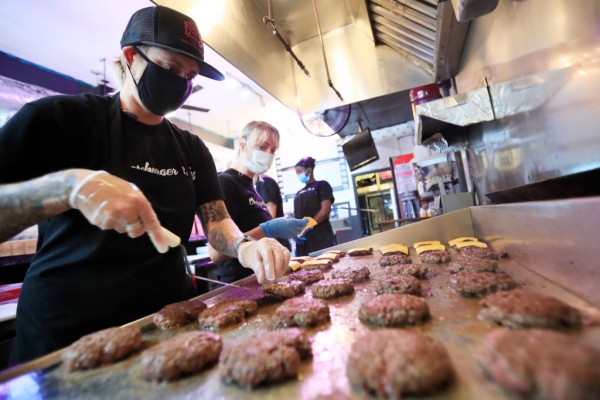 (Photo : Cliff Hawkins)
Owner Stephanie Vitori cooks burgers for first responders in coordination with Meals for Heroes at Cheeseburger Baby on May 07, 2020 in Miami Beach, Florida.

The advancement of technology has influenced people's lives in terms of medicine and even provides us tools that give us convenience. This development also influenced the food industry, and companies like Eat Just to provide foods that promise sustainability, like Singapore's lab-grown meat.

According to Scientific American, lab-grown meats are meat products grown inside the laboratory from cultured cells. Also called lean meat, they add that this can lessen or even eliminate animal cruelty and unethical treatment to animals to produce food for people. This kind of meat is being enjoyed in Singapore as a restaurant in the country offers a meal utilizing the said product.

Read also: Beyond Meat Launches 'Beyond Pork' for the Chinese Market

Restaurant meal made from the meatless product

Science Focus reports that a Singaporean restaurant named 1880 will offer a shared three-course meaty meal produced without resorting to thrashing any animals, which might be the landmark for the industry to be on good terms with the environment.

They add that the cultured chicken to be used in the meal that the restaurant will offer is grown by utilizing bioreactors, which is similar to the devices used in making beer or yogurt.

According to Netral News, the meat that will be served is known as GOOD meat, which was approved by the Singapore Food Standards Agency in December 2020 and is also known as the world's first commercially available cultivated meat product.

In partnership with 1880, Green Queen points out that Eat Just organized a series of four-course dinners, which are already booked out until the end of this year. The first ones to try the meat are Singaporean friends aging from 11 - 12 years old. IN an interview with Green Queen, the 11-year old expresses his delight that more animals will be saved when the meat is readily available in the market, and it will be a lot more sustainable.

According to GOOD Meat's website, apart from the chicken, their company will also work on other types of cells like California pasture-raised cattle and Wagyu from Toriyama Farm situated in Japan.

How is GOOD Meat Made?

Generally the cultured meat is produced by utilizing livestock cells before placing all the necessary substance needed by the cells to grow and increase. This is exactly what GOOD Meat practices and they add that the entire process happens in a very safe and controlled environment comparable to the brewery of beer. However, since the met comes from a livestock's cell, the brand explains that their product is not vegan.

Netral News adds that this meat is undergoes grounding, then it is shaped into a burger. In Singapore, they call it chicken bites. The product will mostly be utilized to form chicken nuggets, which, according to them, might be considered a little standard.

With the ongoing trial of Singapore's first lab-grown meat from Eat Just in 1880, will this mark the beginning of the entrance of lab-grown meat in the food industry? Only time and other factors will determine the success of the product's debut.

Related article: From Lab-grown Meat And Chicken-less Nuggets: Food Innovations That Will Surprise You

WATCH: Inside the Quest to Make Lab Grown Meat from WIRED