Beyond Meat Partners with Pepsi in Promoting Plant-based Snacks 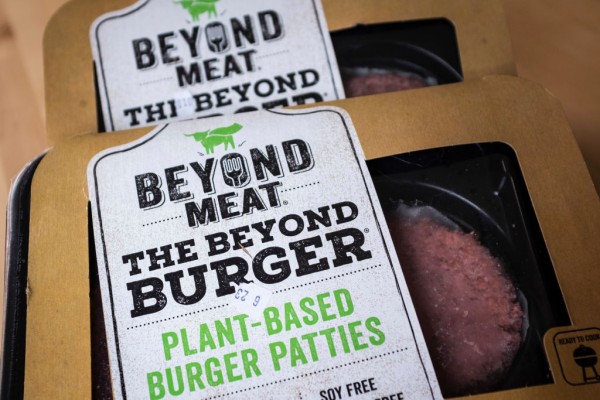 (Photo : Drew Angerer)
In this photo illustration, packages of Beyond Meat "The Beyond Burger" sit on a table, June 13, 2019 in the Brooklyn borough of New York City. Since going public in early May, Beyond Meat's stock has soared more than 450 percent and its market value is over $8 billion.

Snacking is one of people's favorite time of the day because they get to chew on their favorite treat. Burgers and sausages that we usually buy as snacks tend to cause side effects in our body in the long run. Now we can enjoy a healthier option for a snack as Pepsi, and Beyond Meat works hand in hand to promote plant-based snacks.

Plan-based products and even the diet itself gain a large amount of popularity since social media users who undergo the lifestyle post promising results and their fitness journey. Because of this, more and more people are getting conscious and interested in the diet.
Read also: Going Vegan: Vegan Meatball and Noodles with Sriracha

Veg News reports that soft-drink giant PepsiCo and Beyond Meat called their collaboration as PLANet Partnership, which will drive the respective companies to produce, develop, and market plant-based snacks, including beverages. Fox 40 notes that the partnership's news boosted the shares of Beyond Meat close to 18 percent. They add that the partnership will benefit Beyond Meat as they can access and enter more categories, also release new products to market more quickly and efficiently.

In an interview with Veg News, Pepsi's Global Chief Commercial Officer, Ram Krishnan, shares that plant-based proteins are an exciting growth for their company and a new edge in their efforts to establish a more sustainable food system and become a positive force for the people and the planet.

Meanwhile, consumer analyst Ramsey Baghdadi shares with CNN Business that the consumer demand for plant-based products is large enough to impact sales because the plant-based industry continues to grow. UBS research analyst Ericka Jackson wrote to Fox 40 that historically, Beyond Meat's marketing has been nominal, and Pepsi can help push that marketing to a new level and a\entice more customers to avail the product.

Fox 40 notes that Beyond meat is not the only company to expand its vicinity, but other companies like Nestlé sells their plant based-meat through Sweet Earth, which the company acquired in 2017, whilst Kellogg sells their plant-based Meat through their Incogmeato brand.

But Beyond Meat has placed bigger bets as they partner with multiple companies. Veg News notes that Pizza Hut offers their vegan sausages in their pizza nationwide, and Taco Bell, which will revive their potatoes after its hiatus in their menu, responds to the global pandemic and will develop their first vegan option in their menu. Veg News furthers that Beyond Meat also fixed a partnership with coffee giant Starbucks. They offer beyond Meat options in their United Kingdom, China, and the Middle East that offers Beyond Beef filled sandwiches in more than 200 locations in UAE and Kuwait.

With Beyond Meat and Pepsi's partnership, the plant-based diet will be even more promoted across the world through accessing Pepsis reach globally. Moreover, additional options for people who undergo plant-based diets.

Related article: Beyond Meat Launches 'Beyond Pork' for the Chinese Market

WATCH: How Beyond Meat Makes Juice Burgers from Plants from Foodbeast