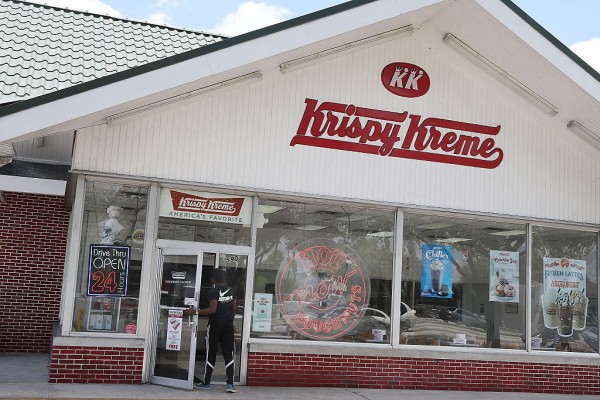 (Photo : Joe Raedle)
A customer walks into a Krispy Kreme donut shop on May 09, 2016 in Miami, Florida. JAB Holdings Company, announced it is acquiring Krispy Kreme Donuts in a deal valued at $1.35 billion.

Planets and doughnuts may be two different things. But it's fun to watch the heavenly bodies while munching on a donut. Now, Krispy Kreme offers a "Mars doughnut" in celebration of NASA's robot perseverance landing on the Red Planet's atmosphere on Feb. 18.

According to Laughing Squid, the Krispy Kreme's Mars doughnut will be a limited edition. It will be available starting Thursday and will be given out while supplies last.

What to Expect on Krispy Kreme's Mars Doughnut?

Based on Krispy Kreme's Twitter post, the Mars doughnut will feature the cookie crumbs on the lower right part of the doughnut and glazed in a red sauce to mimic the geographical appearance of Mars.

However, Nerdist noted that even without tasting the doughnut, its appearance would tell you that this product is unique. It added that it would be a chocolate kreme-filled doughnut dipped in caramel.

CNN said the doughnut would also be topped with a "red planet swirl" icing to have that planet feel. It also noted that if you submitted your name during NASA's send your name to Mars campaign, and you are among the 11 million names on the rover, you just have to bring your boarding pass to the shop and your limited edition donut is free.

Space.com shared that the special doughnut can be found on Krispy Kreme's website and is available for pre-orders and same-day pick-up on selected stores in the United States and Canada.

Krispy Kreme Chief Marketing Officer Dave Skeena told CNN that the rover's landing is an epic and essential achievement. Skeena added that they were celebrating the occasion in the best way they know.

According to NASA, the Perseverance rover will be the agency's ninth mission to land on the Red Planet. The agency noted that the rover would be responsible for characterizing the planet's geology and climate, paving the way for human exploration beyond the moon, and focusing on astrobiology.

It added that the rover would also search for microbial life signs that may have lived and thrived on Mars billions of years ago.

CNN shared that the rover has been traveling since it was launched from Cape Canaveral, Florida last July, and when it reaches the Red Planet, it has already traversed 292.5 million miles on its journey from Earth.

The report noted that the rover would explore the Jezero crater, a site of an ancient lake that existed 3.9 billion years ago, and searched for rocks, soil, and microfossils.

With Krispy Kreme's effort to celebrate the hopeful success of landing NASA's Perseverance in Mars, the Mars doughnut is undoubtedly an "amazing new doughnut discovery right here on earth."