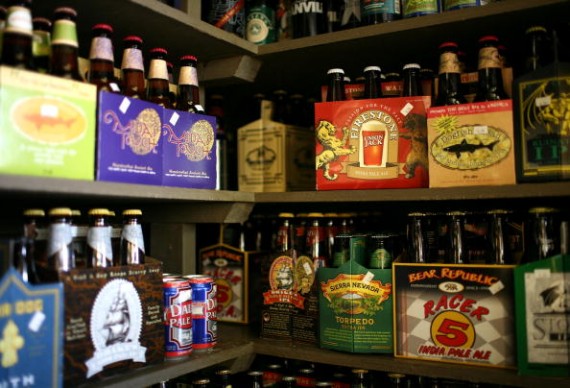 SAN FRANCISCO - MAY 20: Six packs and single bottles of beer are displayed on a shelf at the City Beer Store May 20, 2009 in San Francisco, California. Federal lawmakers are considering an increase on tax paid for beer, wine, liquor and sugary sodas to help fund health insurance for an estimated 50 million uninsured Americans. Under the proposal, taxes on beer would be increased by 48 cents a six-pack.
(Photo : Justin Sullivan/Getty Images)

Colorado residents are put on the decision-maker board toward the latest ballot initiatives regarding whether liquor should be 'equally treated' like beers and wines on store shelves.

Reported by the Coloradoan, the proposal is presented by a group of global liquor traders that seek a license to sell their products anywhere beer and wine sold. Furthermore, the submitted initiative also highlights the permission request to allow the selling of alcohol in 10 locations statewide and not one as legally permitted under the Colorado's law.

The current regulation allows grocery stores sell beer with 3.2% alcohol but for big supermarkets like Target - they're permitted to have one retail store in the state for selling wine, liquor and beer in full strength. The change would mean something to the consumers as they could have more choices on alcohol beverages.

Distilled Spirits Council vice president, Dale Szyndrowski explained the proposed ballot measures are about 'consumer convenience'. Your Choice Colorado has shown full support by saying, "It's what people want" - in regards to the change of expansion in liquor sales - allowing whiskey, vodka and many other distilled spirits to be put on shelves in grocery stores alongside beer and wine.

Georgie Aguirre-Sacasa as the group manager added that the effort is part of the consumer convenience that leaders and legislators have to compromise about.

The proposed initiative, however, has to counter independent microbrewers such as liquor store, distillers and vintners. They refuse any type of plan for the expansion. Colorado Local representative, Ben Davis, said that the reason is unacceptable since craft beer, wine and liquor have progressed positively in Colorado. "Growing grocery store profits is a poor reason to risk what we've built here in Colorado," he added.

With the two ballot measures being submitted, the decision is in Colorado voters' hand, whether to approve the equal treatment or not.

The World's First Champagne Gun To Blast In Miami

Easter 2016 Recipes: Consider This Underappreciated Egg To Put A Twist On Your D ...