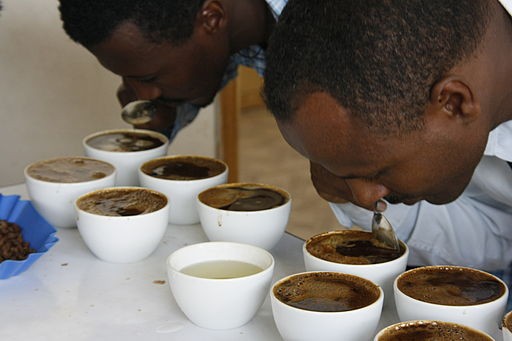 'Cuppers' – the industry term for coffee tasters - score the coffee grounds according to the quality of the aroma. The cuppers are all certified to international standards, and test up to 70 coffee samples a day in peak season. All three cuppers must agree on the score out of 100. If they disagree, the chief cupper is brought in to adjudicate.
(Photo : Pete Lewis / Department for International Development / Wikimedia Commons)

Civet coffee or Kopi Luwak is the world's most expensive coffee. Behind the trend luxury image brewed in a cup, there is a reportedly insane phase of animal cruelty going on.

Luwak coffee has actually gone to a 'not-so-luxury' process from feeding Civets with the beans to scraping the animals' poops. That's where the hundred-dollar-per-kilo digested beans come from. However, it's not the only reason why you shouldn't be proud of drinking the pricey coffee.

The poor endangered mammals were poached and caged in small area with their feet clamped. Suwanna Gauntlett, the woman who established Wildlife Alliance, said that the inhumane way of capturing civets from their habitat could lead to the species extinction.

Lured with pineapple on bait bamboo stick, civets would climb up on it as a metal snare catches its waist. They are then forced to 'work' with only coffee berries to feed on. The small cage size and the force-fed are inhumane. Describing further on the unlucky civets, Gauntlett said that the excessive poaching at the rate is threatening. The activist who also works with Asia's conservation groups explains how coffee farms might refuse to use a humane way because it is more expensive. The humane operation, according to Gauntlett, allows civets to stay in the wild, cage-free.

Luxury coffee store, Harrods, claims to obtain one of its Luwak coffee sources from Ross Kopi, an Indonesia-based operator who performs humane production, by sending workers out the jungle to collect civet feces. The British retailer admitted paying a price of $2,500 for a kilo.

Luwak coffee is considered as the highest quality coffee due to its rarity. The civets lend its musky flavor to the brew - adding a richer taste of coffee with a hint of chocolate and caramel. The quality (and rarity), however, was supposed to be from civet digging the berries on its own as the mammal is a picky animal. With the domination of cruelty behind the trade and fraudulent battery farms - this is an ugly reality.

Blacklisted plantation issue has raised a huge concern after DanWatch research investigation found that even Nestle could not name all of the sources it obtained the coffee from.

The campaign for putting down civet-poop coffee has led closer to its goal. European and American importers restrict their civet coffee bean sources albeit the increasing Kopi Luwak trend in Southeast Asia.

Worrying about the vulnerable species, Gauntlett advises coffee drinkers not to be part of the animal cruelty by putting civet coffee down. "It's encouraging the farming of animals in terrible conditions," she says.