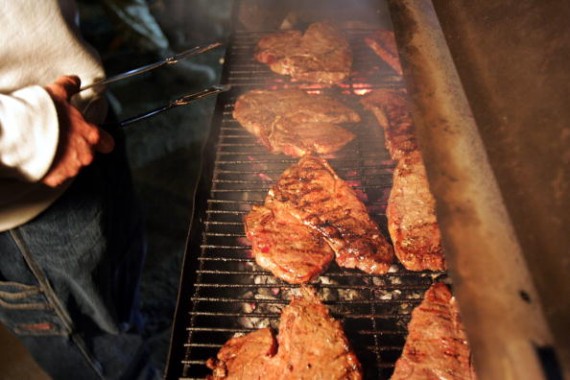 BAGHDAD, IRAQ - DECEMBER 17: T-bone steaks cook on the grill at the U.S. Embassy during a Christmas party for Embassy staff and U.S. soldiers December 17, 2005 in the high security Green Zone of Baghdad, Iraq. Soldiers and Embassy staff in Iraq for the holidays lit a Christmas tree, sang carrols, ate cookies and posed with Santa at the event.
(Photo : John Moore/Getty Images)

We thought tipping was the most questioned issue in restaurants until we found medium-rare meat.

Meat safety has become a concern in the culinary world especially after experts recommend the 'degrees of doneness' in serving meat and poultry. Culinologist at The Culinary Institute of America, Suki Hertz, clarified the fallacy.

The contamination risk in meat isn't based on the source but the meat type itself. Beef as the reservoir of E. Coli could potentially be infected by the bacteria when it is obtained from farms. Based on the USDA and culinary professionals, here's a guideline to cooking your steak!

The expert explained how a fully cooked ground beef could have a higher level of contamination, even when served in well-done degree.

Beef's exterior layer may contain the most bacteria strains but the fact that the pathogens breed could infect the whole muscles would mean the sterilization and searing aren't enough. It would be harder to determine whether ground beef is fully sterilized after being all parts of the surface are mixed with muscles.

Hertz suggests burger patty to be processed at least at 160 degrees Fahrenheit for internal temperature. The USDA guideline has also mentioned potential illness due to undercooked ground beef - recommending the similar degrees of internal temperature as measured by a food thermometer.

Moving to poultry, Hertz suggested that chicken is as dangerous as beef when it comes to bacteria on its surface. Only if the internal temperature has reached 165 degrees that it is safe to be consumed. Being in the field of study for years, Hertz said that she prefers buying poultry in a local farm to the grocery store as the risk of contaminated meat would be much lesser.

Pork, when prepared rare, often pose a higher risk of trichinella parasites than when cooked in safe temperature. Literally, pigs feed on garbage which makes the meat - ideal for pathogens breed. Temperature advisory from the FDA suggests cooking pork in 145 degrees internally. However, as the risk of E. coli bacteria still exists in the cooking procedure, eating raw meat is not considered safe as there is no method to guarantee.