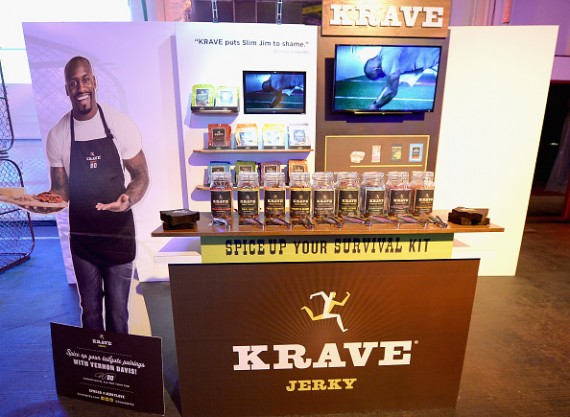 Despite the global vegan craze, meat is still a viable product with a predictable bright future in forms of bars. Krave, as a business unit of Hershey company, will soon release a line of jerky bars. Recreationalists and athletes can now have protein on the go with all-natural Krave Jerky meat snacks.

Presenting all benefits of meat, Krave jerky meat bar is made out of blended meat, vegetables, fruits and grains. Unveiling its nutrition facts, each pack of Krave Jerky meat bar contains 'under 90 calories' per serving with 8 to 12 grams protein per 1 oz. The 'meal replacement' snack is said to fix your fat cravings in a 'seriously satisfying' way without overdoing any carb and calorie.

The CA-based company claims to use a proprietary cooking procedure to keep its salt and cholesterol low. The fact that this meat is fat-free, snacking on Krave Jerky would be better than munching on chips and crackers.

With blends of fruits like black cherry and grains like quinoa, former Krave CEO, Jon Sebastiani, explained the basic ingredient of these bars remain meat - delivering more protein with much less sugar. Speaking to Bakeryandsnacks.com in 2015, Sebastiani implied Krave's meat snack to be a healthier choice than Clif Bar or Larabar that contain sugar between 5 to 24 g per serving. Krave Jerky meat bars were supposed to debut in 2015 but it is now set to launch on a new schedule in August 2016.

Hershey North America president, Michael Buck, said that consumers demanded portable protein-based nutrition and healthy fibers for indulgence - which in turn, could increase the jerky sales. Krave claims to have its own meat-snacking market category and is aiming to sell the products to busy moms, health-concern eaters, and athletes. Shane Chambers, new chief executive, said that the company is a fragmented market but with a great salesforce, he's confident in leveraging the business.