A Cumbria restaurant will give a 30,000-calorie burger if you could manage to scoff it within an hour.

Madihah's is the restaurant that wants to give a 30,000-calorie burger to every burger-lover who could beat the challenge. The burger has 20 slices of bacon, 20 layers of cheese, and 24 lbs.of beef. According to UNILAD, most of us are familiar with the concept though not all of us took on food challenges in our entire lives.

The challenge consists of 56 patties piled with pepperoni, salad, bacon, cheese, and bread. The burger resulted in weighing a whopping two stone that, for preference, is about the same as a small child. Madihah's are willing to give away the burger for free for anyone who can finish eating it within an hour, but Kyle Barlow, Madihah's owner, is 100% sure that nobody could do it.

Barlow said that he wanted to offer the challenge that is "unbeatable." The beef alone contains 30,000 calories, while the cheese has 2,000 calories, making it hard to eat even the cheese alone. 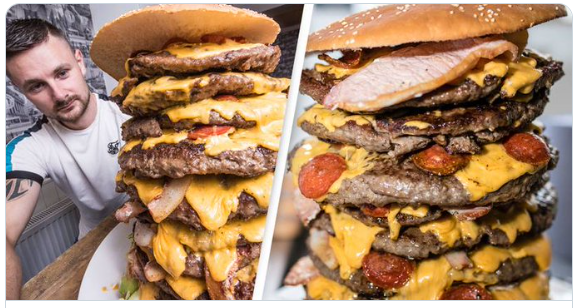 (Photo : Twitter Screenshot)
Restaurant Gives Free 30,000-Calorie Burger If You Could Eat It In An Hour

The Cumbria restaurant had other challenges in the past, but the challenge of eating 30,000 calories burger is the biggest one they had.

"I'm quite certain there isn't another takeaway in the country putting something like this on. If you can finish, then it's free," Kyle said,

The calories of the burger that it has in the challenge that will be taken by anyone who will complete eating the burger will consume enough calories to feed an average person for two weeks. For anyone looking to eat the two stones burger in one sit, the challenge is set every Monday and costs £30, but of course, the price doesn't matter if you are successful in swallowing every mouthful.

Another restaurant has the same concept of the challenge in the U.K. The challenge is called "Britain's biggest takeaway," which offers a burger with 3 lbs.of meat and bigger than a human's head. The Farmer's Boy Inn is famous for its food challenges. The burger challenge is the latest offer, which involves a 3,300-calorie Big Ugly Burger feast equivalent of eight quarter pounders.

Challengers will have to pay £30 for the food, but if they finish the meal in less than half an hour, they will get £20 back. The pub is offering a challenge as a takeaway for customers to try it at home, as per Metro.

The managing director of the pub in Longhope, Gloucestershire, Phil Kiernan, said, "Less than ten people have completed it. One guy from Poland, a bodybuilder, did two because he had just finished a competition. He was about 25 stone and full of muscle. He wanted dessert afterward, too - he's a champion."

Women have also taken the challenge, but men are keener, as per Phil. 12-inch wide burger is served with salad, coleslaw, and chips, which are all locally sourced. In months, diners often finish the chip or burger, but no one has finished both. "We've done it for the last four years, but because of the Covid-19 pandemic, we were closed for nearly four months, so we stopped it. The Big Ugly Burger is the biggest challenge we do. We usually do it every other month," Kiernan continued.