The Pilot launched on September 9, in Fayetteville, North Carolina, which is limited to select household essential items and groceries from retailers' local stores.

In a press release, Tom Ward, senior vice president of customer product at Walmart, stated, "We know that it will be some time before we see millions of packages delivered using drone. That still feels like a bit of science fiction, but we are at a point where we're learning more about the technology that is available and how we can use it to make our customers' lives easier." 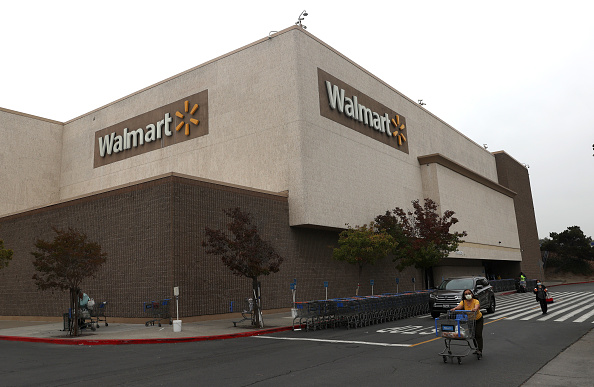 (Photo : Justin Sullivan)
Walmart Launches Walmart Plus Delivery Service RICHMOND, CALIFORNIA - SEPTEMBER 03: Customers leave a Walmart store on September 03, 2020 in Richmond, California. Walmart has announced plans to launch Walmart Plus delivery service to compete with Amazon Prime. The $98 per year service will offer free delivery of food and items available from nearby stores.

According to Futurism, Flytrex's drones can fly at 32 mph at 230 ft.and can release payload stored inside a delivery box under the rotors through a wire release mechanism. Orders are lowered using the wire from 80ft., ensuring a "quiet and secure delivery," as per the company's website.

The news came after Amazon designated an "air carrier" in August by the Federal Aviation Administration, allowing Amazon to start testing drone package deliveries. Also, Amazon develops its proprietary drones that transform a helicopter configuration to an airplane one. These drones can carry five pounds packages to customers within a fifteen-mile radius.

On the contrary, Flytrex's drones can carry up to 6.6 pounds for a distance of 3.5 miles and back, according to the company. But Flytrex drones can't fly if there are rain or wind gusts to more than 18 mph.

A demo video shows how the packages were lower to the ground from 80 ft.in the air than having to land itself. Last year, Flytrex received its approval from the FAA to test drone food delivery in North Carolina. The authorization indicates that Flytrex drones can only fly predetermined routes in daytime over unpopulated areas.

The Verge reported that Walmart offered few details on the program, such as how many drones are involved in the Pilot and what checks customers need to make before receiving delivery.

On the other hand, iFood announced in August that the company received its regulatory approval from the National Civil Aviation Agency (ANAC) in Brazil. The drone food delivery will soon be available in Campinas City, in Brazil.

According to Latin Post, the operation of iFood in using drones is coordinated with Speedbird Aero. Drone food deliveries operated by iFood will start in October. The approval of drone-assisted food deliveries is the first time in Latin America, as per The Spoon.

The first drone-operated food delivery by iFood and Speedbird Aero won't deliver directly to its front door. Instead, iFood will use a hybrid technique which involves drones and last-mile ground transportation.

Brazil will have a more comfortable mode of food delivery services through Speedbird Aero, the first company in Brazil and Latin America to operate unmanned aerial systems to manage and deliver products.