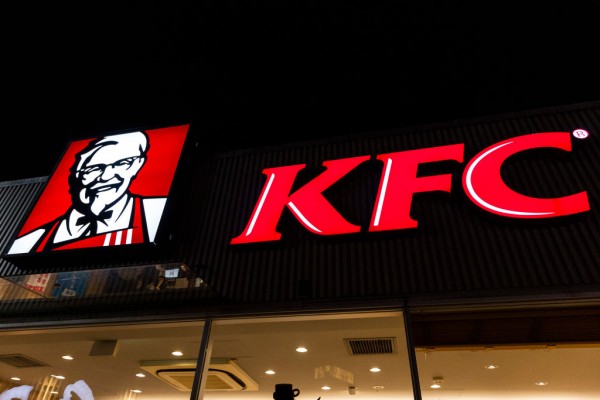 (Photo : Yuichi Yamazaki)
A KFC logo is pictured on December 23, 2020 in Tokyo, Japan. KFC at Christmas has become something of a tradition in Japan with some attributing its yuletide popularity to a kindergarten delivery being made in a Santa Claus outfit which was such a success it was requested by a number of other schools and subsequently gave the company the idea of associating its product to Christmas. The chain launched its first Christmas campaign in December 1974, and has continued to do so every year at all its outlets nationwide. In 2018, KFC Japan posted all-time high sales of roughly 68 million USD for the five days from December 21 to 25. Roughly 10 percent of its annual turnover for the entire year.

In a report by Delish, the sandwich is following a successful test run down that happened in Florida in May 2020, making the chicken sandwich tried and true.

Yahoo! Life describes that the new KFC chicken sandwich is made with quarter-pound, all-white meat which was double breaded making the chicken fillet extra crispy.

They add that the fillet will be sandwiched by a toasted brioche bun topped with thicker crispy pickles, with either spicy or mayo as the sauce.

MSN notes that Kentucky Fried Chicken's Innovation team shares that they tested pickles with 8 different sizes and the brand had a collaboration with bakeries with more than 10 recipes for them to identify the right bun that will complement their thick and crispy chicken.

MSN notes that this kind of activity is what they call dedication. In October 2020, KFC added in their lineup of flavorful sauces a new dipping sauce that says "chicken dippin' good", a wordplay of their famous tagline for the brand's chicken.

The new chicken sandwich of KFC is now available in selected markets but will soon be available across their restaurants in the United States by the end of February which was noted by the brand itself.

Since early 2021 marks the entries of several fast-food chains introducing new item s in the menu such as KFC, the year where people who are ordering chicken sandwiches to put on their table is not very near.

Alongside KFC's announcement of their new food menu item, McDonald's earlier released three new items a deluxe and spicy version of their chicken sandwich in their menu that will also include pickles, tomatoes, lettuce, and their signature mayonnaise.

The brands who announces their new chicken sandwich to be included in their menu is trying to challenge Chick-fil-a and Popeye'; brands with both established reputation in the chicken sandwich business.

It can be remembered that Chick-fil-a's recent update to their menu was a brownie and a coffee dating back to September 2020.

Since the Chicken Sandwich Wars is commencing, we can't wait for other restaurants and fast-food chains like KFC to release their version of the chicken sandwich, so that customers will have more options when it comes to the meal and finds out from which chain is the best.