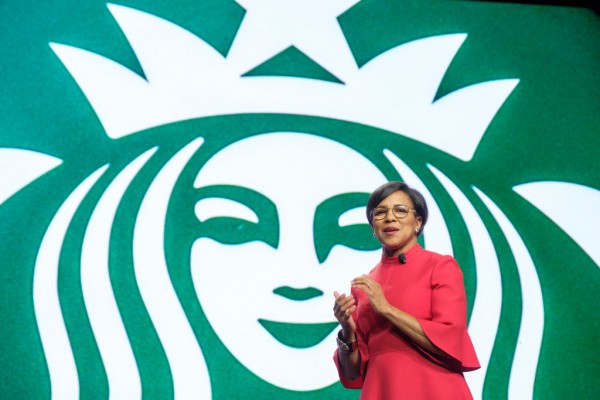 (Photo : Stephen Brashear)
Starbucks Chief Operating Officer and group president Roz Brewer speaks during the company's annual shareholders meeting at WAMU Theater, on March 20, 2019 in Seattle, Washington. The company reported on growth and efforts toward sustainability in agriculture and packaging.

Nothing feels more splendid when you know that a cup of Starbucks coffee can support its plan to help and take part in the Black Lives Matter campaign.

Britannica defines the campaign as an international social movement formed in the United States way back in 2013 dedicated to standing against racism and anti-Black violence such as police brutality.

Now that Black people and other people of color are the subjects of oppression, supporting them through the coffee brand's movement will help them grasp hope in a society filled with discrimination.

A CNBC report said the brand's Community Resilience Fund is a part of a broader plan to stand and reinforce its commitment to racial and social equity, most especially in places where its cafes operate.

In response to the Black Lives Matter protest last June, the coffee chain promised an allocation of $1 million alongside other companies that will give money to fight back against racism. Pehal News notes that Starbucks, in the end, gave an extra $500,000 in grants.

Read also: Brace Yourself for 3 New Additions in Starbucks Winter Menu This 2021

Now, the brand allocates a new fund of $100 million, which caters to cities with a high populace of Black, Indigenous, and people of color, and plans to continue the funds in the next four years.

MSN notes that the 2018 incident wherein the police arrested two Black men waiting for their business meeting before ordering their coffee led Starbucks to close down their company-owned establishments for a one-day racial bias training.

Where will the money go?

CNBC notes that the brand's goal is to help connect the private and public sectors, emphasizing that small businesses could not get ahold of the federal funding due to the Paycheck Protection Program that was supposed to help them during the pandemic.

In response to this, Pehal News stresses that the fund will help the neighborhood monetary establishments that offer financial companies to low-income people. It adds that neighborhood growth tasks should also be a part of the program as beneficiary.

MSN cites the word of Starbucks' Chief Operating Officer Roz Brewer, saying that the communities they will be helping are their business partners and maybe small suppliers of Starbucks. He adds that they can't help but hope for them to thrive.

This Starbucks' movement and their way of supporting the Black Lives Matter campaign will help lift the morale and confidence of the people who are mostly the target of oppression. With this movement, the company has shown that they are responsible enough to sympathize and put themselves in other people's shoes.