This Valentine's Day, You Can Get Married at Dunkin' Donuts Drive Thru! 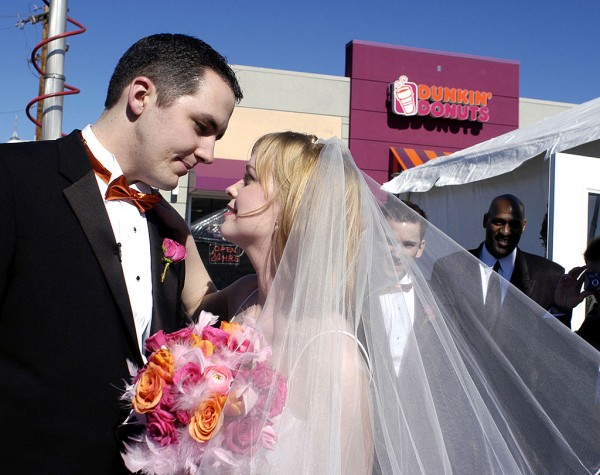 Dunkin' joins the wedding industry as the company expand their vicinity in offering more than just-food. Fox Business reports that the brand will present their Dunkin' Wedding Merch line and their Drive-thru wedding contest, following the nearing celebration of Valentine's Day.

Apart from the merchandise, PR Newswire adds that the brand will also offer seasonal menu items that will fit the romantic celebration, such as Pink Velvet Macchiato, Mocha Macchiato, Brownie Batter Donut, and Cupid's Choice Donut.

Since the coronavirus is still prevalent and wreaks havoc not only in the United States and around the world, Fox Business shares that the Dunkin wedding merch will be released through a virtual pop-up shop.
Read also: Dunkin is Ramping Up Beverage Innovations Amid Global Pandemic

In addition, PR Newswire shares that the brand has been a witness to countless couples making their Dunkin' wedding merch, which becomes the driving force of the brand to push through in releasing their merchandise line.

Dunkin' shares with Mass Live that their brand will be sharing a little pink and orange with the fans who will undergo the matrimony. This means that the merch will have the same color palette as the brand's logo. However, details of what merch will be released are not yet announced. However, Fox News shares that the brand will drop its mysterious products on February 11.

Dunkin' offers another fascinating treat for the fans as they hold their "Marriage is on the Menu" contest to honor their Oklahoma City General Manager when he wedded on the restaurant's drive-thru in the previous year, according to Fox News. Mashed reports that that officiants of the "I Do" Drive-Thru Weddings will legally marry the winners of the said contest.

Mashed adds that New York residents may enter the said contest by posting a photo on their Instagram account, including the #DunkinIDoContest, while stating their reason why they want to wed on Dunkin's drive-thru and can post their entries until January 30.

PR Newswire also notes that each couple will be receiving a unique wedding present from the brand, including a gift basket of Dunkin' wedding accessories, professional photos, and 500 dollars cash prize.

Mass Live reports that in 2019, two Dunkin' fans got married in Worcester Dunkin', noting that more and more fans are getting excited about the idea. With Dunkin's plan to expand and dominate the wedding industry through their wedding merchandise and their drive-thru weddings, more and more fans and future fans will have a chance to get married with their love for the brand as the center.

It is worth noting that Dunkin' is trying to do their best in giving their patrons fan service that will keep them from coming back to their stores. Will it be a boom of a flop? Only time will determine if the brand will be successful with its ventures.