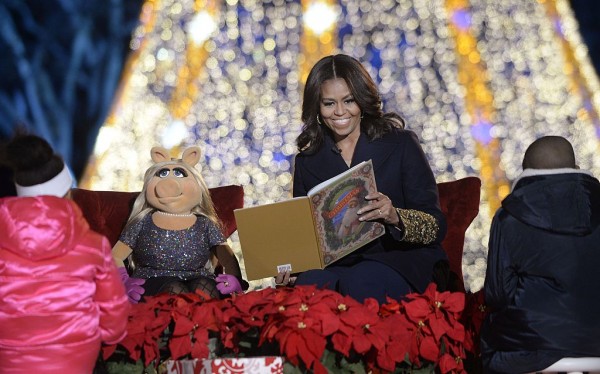 (Photo : Olivier Douliery)
First lady Michelle Obama and Miss Piggy read a children's book from the stage during the national Christmas tree lighting ceremony on the Ellipse south of the White House December 3, 2015 in Washington, DC.

From co-hosting in the Ellen Show and having a trip with Ellen on Target, former First Lady Michelle Obama is hosting a children's cooking show that will be streamed on Netflix. The Hook shares that Michelle Obama will be joined by two adorable puppets named Mochi and Waffles and the trio will be teaching kids all about cooking healthy yet tasty food and snacks.

The former first lady shares with Biz Journals that the show will continue the Partnership for a Healthier America. She adds that the show also aims to get healthier and fresh ingredients for the families in need across the country to cook together at home, which is a part of the show's commitment: to help families during the pandemic.

What is the New Netflix Show All About?

Woman and Home shares that Michelle Obama announces the show in her Instagram post that the exhibition entitled "Waffles + Mochi" will tackle anything about food, such as discovering them, cooking them, and eating them. She adds that the two puppets that will accompany her in the show will take the viewers on an adventure worldwide to discover fresh ingredients and try out their recipes.

Obama shares with Biz Journals that she wishes that shows like what they are doing are already around when she was a child. She also expresses her sympathies to all the families in these trying times, and she hopes that this show will be able to bring light and laughter to homes around the globe.

The Hook mentions Netflix's statement saying that Obama will play a supermarket owner, opposite the two puppets from The Land of Frozen Food.

Their new show will feature global ingredient missions and explore kitchens, farms, restaurants, and homes worldwide. The show also aligns with Obama's work as the first lady who focused on improving millions of children's diets by updating the federal nutrition standards and bringing healthier meals to school.

Netflix also shares with Woman and Home that the series will be featuring various celebrity chefs alongside kids, home cooks, and celebrities. It adds that the show will be airing on Mar. 16, 2021, and will consist of 10 episodes.

Michelle Obama and her advocacies

It is not beyond the knowledge that former first lady Michelle Obama is an advocate of specific causes. Forbes mentions that she is an advocate of physical and mental health as the first lady, which was evident when she organized the group "Lets Move!" in 2010 and served as the honorary chair for the Partnership for a Healthier America.

Vox adds that through the force of her leadership, FLOTUS was able to improve school lunches. In 2020, NBC News reports that the former first lady had a partnership with PBS Kids and Penguin Random House in organizing a weekly read-along series entitled "Mondays with Michelle Obama" that will make her read her favorite children's books.

With Michelle Obama's advocacies that will transcend through her new cooking show on Netflix, American families will have another option to spend their time together on an educational, yet adventurous and delicious series.