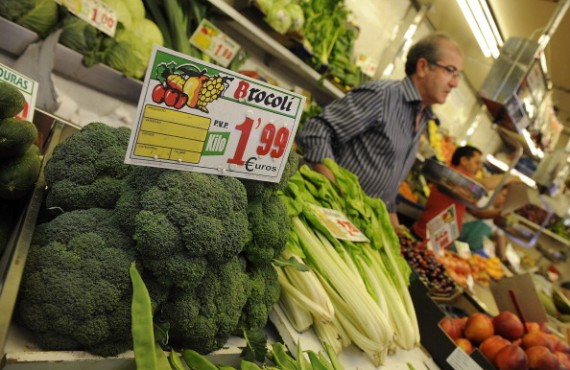 MADRID, SPAIN - JUNE 03: Brocoli is sold a stall at San Anton market on June 3, 2011 in Madrid, Spain. Spaniards continue to buy fresh fruit and vegetables despite the outbreak of E.coli bacteria, also known as EHEC, which is thought to have killed 16 people and left hundreds sick across Europe.
(Photo : Denis Doyle/Getty Images)

Frozen food producer, Alimentos Congelados, S.A. recalled packages of broccoli cuts sold in 11 states after Ohio lab found one of the goods was contaminated with Listeria. The decision to recall the Wylwood-labeled frozen greens was being voluntarily made after the cuts were proven to carry the harmful bacteria.

So far, there has been no sickness reported after the incident. The company suggests consumers to throw away the item in case they have purchased it. Alimentos Congelados, S.A has recalled more than a thousand cases of the vegetable cuts after the Listeria outbreak occurred. The FDA published Guidance for Industry and recommends food processing methods that will prevent the growth of Listeria monocytogens. It is stated that it should be the manufacturer's responsibility to ensure that there is no food-borne illness upon the distribution of their goods. Manufacturers, here, refer to all of the retailers and food services in the industry.

The company spokesperson said that there is no illness or complaint being reported up to this day regarding the infected Wylwood frozen packs. More than 1.500 cases have been recalled by Alimentos Congelados - where packages were previously distributed in Indiana, Virginia, Kentucky, North and South Carolina, Ohio, Tennessee, and Alabama.

According to the FDA website recalls section, the label of the infected broccoli cuts is Wylwood Fresh Frozen Broccoli Cuts, NET WT. 16 OZ (1 LB), UPC 5193300110. The poly bag carries code: A25335P and A15335P. The company is reportedly being cooperative with the investigation and encouraging consumers to contact official support at 1-800-888-4646 should there be any question or request for a refund.

Before Wylwood case, Listeria was found in Blue Bell's ice cream packs causing the company being suspended to identify the root cause. Listeria infection can result mild to the severe condition including symptoms such as fever, nausea, and diarrhea. Fatal infections include miscarriages and the weakened immune system.