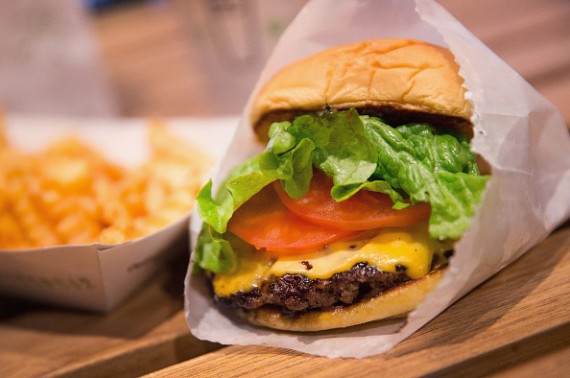 CHICAGO, IL - JANUARY 28: In this photo illustration a cheeseburger and french fries are served up at a Shake Shack restaurant on January 28, 2015 in Chicago, Illinois. The burger chain, with currently has 63 locations, is expected to go public this week with an IPO priced between $17 to $19 a share. The company will trade on the New York Stock Exchange under the ticker symbol SHAK.
(Photo : Scott Olson/Getty Images)

After visiting a friend's sushi eatery in Montreal, Caroline Pellegrini concerned at how much leftover food went to the dustbin that day. As a food lover, Pellegrini had never thought about the idea until she saw it with her own eyes where there were packages of sushi unsold till the end of the day, albeit at discounted price.

Feeling responsible for the planet, Pellegrini decided to make an app that could prevent leftover foods in eateries from making a trip to the landfill. The Montrealer created Ubifood - an app that she believed would cut the amount of food waste in Canada while helping budget foodies searching for best deals in town.

The app true aim is to 'save and savor local flavors'. Pellegrini believes that Ubifood can help to prevent any loss of surplus food because every user gets notified on new deals in real-time. For the hungry daze, this means having their favorite foods at much cheaper price, as for the retailers, they can rely on technology to help to market their dishes.

Pellegrini describes this cycle as a mutual symbiosis where everyone gets the benefits - even the planet. At the moment, Ubi food has connected nearby bakeries, fast food chains, and many other eateries with their consumers. Users can also reserve meals they choose from within the app to be picked later. Ubifood is currently downloadable at the App Store.

Food waste is a global issue as many countries have been struggling with the problem. It is estimated that Canada's landfills receive $14.6 billion of food waste from households each year. In the United States, grocery stores like Hy-Vee find ways to reduce food spoilage by turning food scraps to compost whilst France bans its supermarkets from throwing unsold foods to trash and forces the stores to donate them instead.