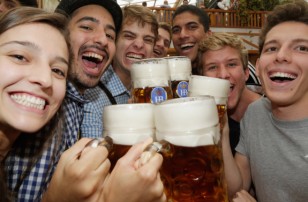 Are You an American Public Drinker?

ItYou might be craving for a cold beer after work and want to just grab one at your one-stop shop and drink while you’re walking to your way home.

Eating Only the Real Wasabi

Healthier Fast Food Fried Chicken That Will Surprise You

We love to give in to the sweet temptations of our fast food cravings, right? We especially love fried chicken!

Kids have their own preference when it comes to food. As parents or guardians, we can only help convince and guide them on what to eat.

There's a science on how to live a happy life. The basics is to indulge yourself with what else but-Happy Food!

John Sylvan, Keurig co-founder and creator of the most famous K-Cup pods, which are single-serve coffee containers regrets in ever creating them.

The latest controversy is about the support extended to the most speculated bill widely called as DARK Act, by the Senate Agriculture Committee.

A potluck dinner has become popular not only in work places, but especially for luncheons, parties and celebrations.

Apart from cancer, allspice has also proved to heal many other ailments. It is a traditional medicine for many digestive problems and it help relieve a person from gastric problems, abdominal pain, and even indigestion.

Science Tells You Why You Can’t Stop Munching Pringles

"Once you pop, you can't stop!" This is Pringles' most popular slogan and advertised all over the world. Is it true then that you can't stop eating this brand of potato- and wheat-based stackable snack chips once you start munching? Yes, it's true. Here's why.

How many times in a year do you eat at fastfood chains? How many times were you lazy to cook and decide to buy some value meal or a Happy meal at a drive through? Each value meal comes with a cold drink, right? Do you ever wonder what’s in your drink? Did it ever cross your mind that your drink contains a variety of bacteria or even E.coli?

Published in a Carnegie Mellon University journal, the study argues that eating what is considered vegetarian menu choices can increase environmental impact in three metrics.

Coffee on the Go: Introducing GO CUBES, The Coffee in Gummy Form

Who says a coffee should be in a cup? Nootrobox, a company specializing in cognitive enhancing food supplements called nootropics, recently launched the latest addition to their expanding line – the coffee-flavored gummy bites called Go Cubes.

Can Cats from the Cat Island Solve the Food Waste Crisis?

Who would have thought that the world would thank an island full of felines later?

Chefs Tell Us Why Customers Boycott a Resto

A salesman will tell you why you lose out on sales, and that’s probably because you failed to gather and analyze the data on lost sales or non-repeat customers. As for the restaurant industry, it is pure common sense. You don’t need to be a chef or take a culinary arts degree to tell why customers don’t come back to your restaurant.