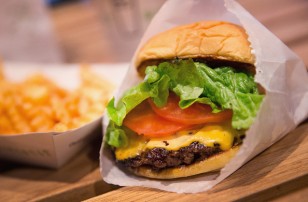 Feeling responsible for the planet, Pellegrini decided to make an app that could prevent leftover foods in eateries from making a trip to the landfill.

With food consumption standards falling in the past few years, there are reasons to believe a meat-less diet would bring in dramatic improvements in public health.

A new research in the United Kingdom claims that eating foods such as nuts and vegetable oil can slow the progress of Type 2 diabetes.

Can UberEATS Answer All Your Seamless Despairs?

There's no debating the way that almost everybody living in New York City is dependent on Seamless for no less than a quarter of their week after week meals yet the world is not all daylight and soup dumplings. In spite of all the positive things about Seamless, there's bounty to whine about like long holds up, intermittent high minimums and delivery expenses and ghost restaurants.

Xiaomi's new device is apparently, not a smartphone

In a world where everything is "smart" it is not surprising that even the wine industry will get a taste of the advancement of technology. Introducing the "smart wine dispenser" equipped with touchscreen and wifi.

Most of us have tasted the unappetizing mid-flight meals and there is no doubt that they have a very poor reputation. While you may be wondering why the food had an entirely different flavor when served at an altitude of 35,000 feet, the fact is that there are a number of scientific principles that affect both one's sense of taste as well as the food.

There is a new technological achievement that enables people to find contaminated food on their shelves, and this takes the form of a laser.

In this age, technology comes in all shapes and sizes. Gadgets are designed to make life easier. At the same time, these gadgets are created in compact and concise dimensions. Just like the new water testing kit that is made in the form of a typical smart phone cover.