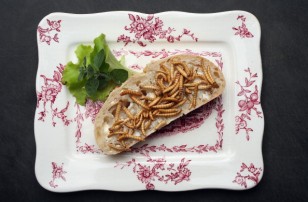 In a pioneering move, two Austrian entrepreneurs, Katharina Unger, 25, and Julia Kaisinger, 28, have developed a novel device that helps to breed protein-rich mealworms in the comforts of one's home and subsequently eat them.

Experts Rely On Chocolate To Save Food Packaging

According to the National University of Singapore's (NUS), its team of food scientists is partnering with a local food manufacturer called Y G C Group (S) Pte Ltd to launch its new healthy and tasty seaweed drink.

Cultured butter, also known as sweet cream butter, is considered premium by today's culinary standards. It is very nutritional which has live micro-organisms and "healthy fat" compared to normal butter. It is made by adding live bacteria to cream before churning. The good news for health buffs is that this premium cultured butter can easily be made at home.

The study supports evidence suggesting that Neanderthals were omnivorous.

There is a new piece of wearable technology developed in the University of Buffalo. It's not your typical smart watch or smart band but a "smart necklace". It can track your food intake by the sound you make.

Seaweed is now known as a rich source of protein, according to the Institute of Food Technologists

Have You Tried Canned Whiskey?

Stillhouse Original Moonshine is not your typical whiskey in a bottle

Are You Willing to Take a Bite of the First Lab-Grown Meat Balls?

Welcome to the future because science can now produce meat balls from lab-enhanced beef cells.

The Interesting Story Behind the Invention of Cocktails

YouTube Co – Founder Steve Chen, along with former lead engineer Vijay Karunamurthy have created an app that takes the cooking shows to a completely new level.

In a latest development in culinary science, a team of scientists at Memphis Meats, located in San Francisco Bay Area, has successfully developed contamination-free meat in a laboratory using animal cells. The best part of this cultured meat is that it can be harvested anything between 9 to 21 days.

Gatorade Offers New Yogurt that Builds Muscles While You Sleep

Gatorade diversifies its product offerings by announcing new additions; such as a night yogurt touted to build and repair muscles during sleep, a thinking bottle cap that advises fluid intake and a cafeinne-free power boost.