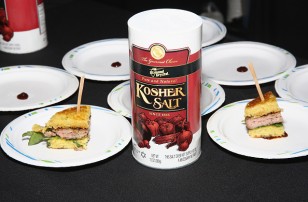 When it comes to serving food to people visiting your house, it should help to be aware of your guests’ eating restrictions.

Reddit's Food Pantry is the Best Place on the Internet

Insects: Our Food For The Future?

While "insect foods" are yet to become a trend in North America, many people are gradually changing their menu and consuming insects in view of the soaring prices of animal protein and food security becoming an increasing problem.

How Restaurants Can Fight Global Warming

Global warming has been an advancing debate for quite a while. It's the overall ascent of worldwide temperatures most importantly around the globe we live in. It's not all enjoyment in the sun during the middle of January the same number of individuals might think. One more serious note this is creating numerous not all that fun occasions on the planet such as droughts and plants and creatures to be out of rhythm with the seasons. All individuals around the world should do preventive measures to control its effect including restaurant’s owners.

The Easy Bread Machine is arguably the easiest way to make bread. Here's how it works.

“Charging customers as little as possible while paying the team as much as possible.” This is MOD’s Pizza concept. This is the kind of brand MOD would like to establish when it started the business in 2008.

UberEATS Now a Food Delivery App, Not Just an Option at Uber

It was only in the second quarter of last year when Uber introduced an option called UberEATS in the cities it operates like Chicago, Los Angeles, New York City, and Toronto. Now, the new UberEATS is separate and an independent app available on iOS and Android.

Scientists in the Netherlands have been successful in growing more crop species on Mars and moon soil stimulant. Applying what they learnt from their first experiments in growing crops on such soil, the researchers successfully grew and harvested a variety of crops, including tomatoes, radish, peas, cress, rye, quinoa, chives and garden rocket during their second experiment, which was undertaken at the Wageningen University & Research centre in the Netherlands.

Marley Spoon, popularly known as your food delivery service of delicious recipes and fresh ingredients is eyeing to expand its business in the U.S. The company plans to use its Series B funding for further U.S. expansion, spanning the West Coast, including opening a new San Francisco-¬based fulfilment facility, the East Coast, and South. Along with North America, the startup operates in the U.K., the Netherlands, Austria, and Australia.

6 Ways to a Healthier Eating in a Fast Food Restaurant

A healthier meal is still possible in a fast food restaurant if one follows these six steps.

Top conglomerates of food industry have been in the business for decades but with the advent of “edible” startups, analysts see a decline in the traditional way of patronizing food industries, instead it shifts its eyes to food startups! It also means that for huge established food brands doing the same thing all over again, they must come out, explore and innovate. Otherwise, the startup companies will surely dominate the market as it does now.

For caffeine lovers who couldn’t actually pull an all – nighter without coffee, and hate to travel to Dunkin’ Donuts outlets for a cup, will definitely find Dunkin’ Donuts easing their pain.

Recycling Your Fridge Pizza Into a Brand New Dish

From time to time, we just love pizza! It’s a fastfood that gives you a no-brainer decision when you’re too lazy to choose what food to eat. Here are some helpful recipes on how to recycle your cold pizza into hot, brand new dish:

Eagles Roost, a sports bar in Irvine, Kentucky recently closed down because of salmonella outbreak. Initially, it has been reported that at least 60 people suffered from the salmonella outbreak. The number has gone up to 100 as of this writing. Before the outbreak, a diner of the sports bar wrote on Eagles Roost Sports Bar official Facebook account, quote “Need to work on atmosphere and quality of food preparation...hopefully they will be able to tweak a lot of issues.”