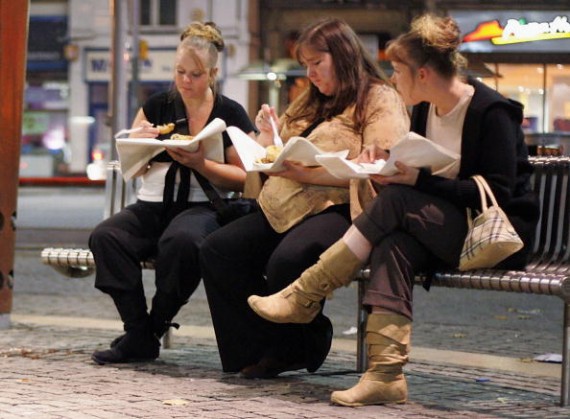 BRISTOL, ENGLAND - OCTOBER 15: Three women eat take-away food after a night-out in Bristol City Centre on October 15, 2005 in Bristol, England. Pubs and clubs are preparing for the new Licensing laws due to come into force on November 24 2005, which will allow pubs and clubs longer and more flexible opening hours. Opponents of the law believe this will lead to more binge-drinking with increased alcohol related crime, violence and disorder while health experts fear an increase in alcohol related illnesses and alcoholism.
(Photo : Matt Cardy/Getty Images)

Many studies have published how not having enough sleep can lead to wide range of health risks, from mild to severe, such as the decrease in alertness, heart disease, diabetes, or high blood pressure. Many of the researchers also found that sleep loss causes a person to eat more, uncontrollably.

Indeed, before the study's published, we thought that it was our lack of sleep that caused us to binge-eating. Sleep Journal explained a new link that proves it's the other way round.

Suggesting the same chemical procedure, the journal of Sleep found that the way you're snacking in daylight could possibly affect your sleeping quality at night. The research highlights an important test where endocannabinoid stimulated after food intake could have a contributing factor on sleep restriction. Endocannabinoid or eCB is the same receptors triggered after taking marijuana - leaving a person to feel high.

The study was conducted by 14 volunteers aged 18 to 30. All participants were having four nights of sleep, where among those days, they didn't have quality sleep. Then, they were taking meals two times in a day, healthy and unhealthy snacks including yogurts, fruits, chips and sweet treats. Between the events, experts recorded their level of eCB and how it's activated within.

The study result showed what previous theories didn't take note of. It suggests that eCB is activated due to the food intake and appetite - which eventually leads to sleep deprivation. The uncontrollable habit was particularly caused by the carbs and fats they consumed. The pattern continues as the participants who had trouble in sleeping, were said to eat more. Deprived individuals felt hungrier and had no control over their snacking habits. They ended up taking more foods.

With this finding, scientists hope that this leads to another scientific information on food cravings and develop an aid to control binge eating.