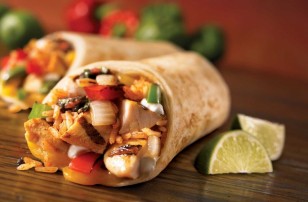 Taco Bell Taco Bell is now testing out new $1 items that will have mind-blowing taste at a very affordable price point.

When Meghan Markle talked about her humble beginnings and shared that she once worked for a frozen yogurt shop called Humphrey Yogart, the shop saw a massive boost in its sales.

"Friends" fans rejoice. There's a new ice cream inspired by the NBC sitcom and it comes in a rare coffee flavor.

Try These 3 New Lumpia Recipes With a Twist

People saw in TikTok a lumpia filled with both cream and boba, drizzled with brown sugar sesame glaze.

Krispy Kreme introduces its green donuts, just in time for St. Patrick's Day. They certainly prepared for this holiday.

After announcing the Crunchwrap Supreme, which had some avid fans jumping up and down, the famous chain now said it's bringing one of the fans' favorites - the Quesalupa.

The wines are called Gordon Ramsay Signature Wines. The famous chef crafted by the wines in collaboration with winemaker and Master Sommelier Chris Miller at Seabold Cellars located in Monterey, California

3 Benefits to Eating Raisins You Might Not Know About

Raisins are so easy to eat. You can just eat them from the box or sprinkle them on top of your oats, which are also known to be rich in fiber, for that extra digestion boost.

He wants his fans to drop meat too, not because he wants them to become vegans, but he believes doing so will save the planet from its impending ruin due to climate change.

Note that Starbucks' Cinnamon Toast Crunch cannot be ordered using this name exactly, or else you would be met with some raised eyebrows.

The Peeps Easter Cake Kit includes one sunny yellow mug that is actually microwavable and at the same time, adorned with the cutests of Peeps chicks and bunnies, and then one marshmallow flavored cake mix that has mini marshmallows in it.

At select Chili's locations, fans can get margaritas by the gallon and to-go.

On March 5, Teigen announced the launch of her Cravings Popcorn Seasoning Spice Kit. In each kit, there's a bottle of white gold popcorn kernels as well as a spice mix.

Seitan Is the New Star of Tiktok Food, but Beware of Risks

Seitan may sound new as a meat alternative, but it has actually been around commercially for years. Is it safe to eat all the time, though?