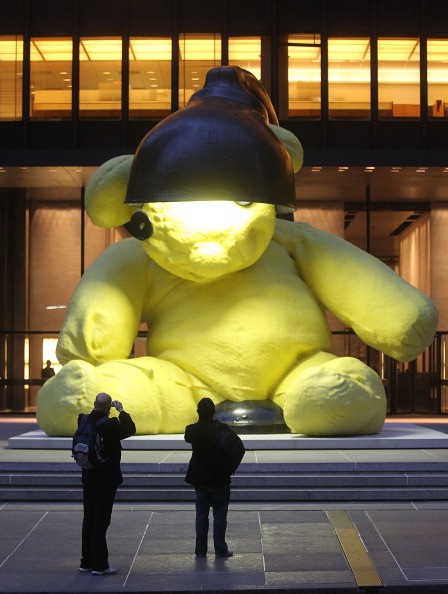 NEW YORK, NY - APRIL 08: People view the 23-foot 'Unitled (LAMP/BEAR)' outdoor sculpture of a teddy bear by artist Urs Fischer April 8, 2011 in New York City. The 35,000 pound sculpture of a yellow teddy bear with a working lamp will be on display for five months in front of the Seagram Building in Manhattan. The sculpture is expected to sell for more than $10 million at Christies Post-War & Contemporary Evening Sale on May 11.
(Photo : Mario Tama/Getty Images)

The date is set. New York's fine dining venue, Four Seasons Restaurant, will not be operating in the Seagram Building anymore after July 16.

Restaurateurs Julian Niccolini and Alex Von Bidder have announced the end of their Midtown resto since last year and hope to relocate soon.  Some of the regulars who have waved goodbye to the spot include cooking-expert, Martha Stewart, and Vanity Fair editor, Graydon Carter.

Before the restaurant reaches the end, both owners will hold a furniture auction in the final week. The auction highlights the venue's intriguing furniture designed by Phillip Johnson; coffee pots and pans created by Ada Louise Huxtable and husband.

Four Seasons will be relocating its business to the southern side of Seagram but before that, owners are preparing 'closing ceremony' especially for the consumers. During an interview, Von Bidder commented on the relocation optimistically, saying that people would 'come and see us' in case they miss the delectable courses.

The restaurant will also celebrate the closing ceremony with charity dinners, inviting loyal customers for the last reception at the bottom floor of Seagram Building. The business will officially be closed on July 17, making July 16 - the last day of the meals served in the spot. Then, there will also be a private party for the staffs, too.

Four Seasons and Seagram building owner failed to reach an agreement as the skyscraper management plans to renew the atmosphere with a more refreshing venue. The restaurant has been the landmark regularly visited by high-profile brokers, business persons, designers, and celebrities.

Refusing to extend the contract, Seagram sees the dining venue as a part of the history, now that it has reached 57 years old since its first establishment in 1959. After taking over space, Seagram's owner and art enthusiast, Aby J. Rosen, still has to deal with refusal from commissioners of the landmark after suggesting to rejuvenate the space. They disapproved the request but agreed on changing the venue's carpet.